May 1, 2015. Yep, the official start to “OUR” month – Brain Cancer/Tumor Awareness Month. It’s kinda a big deal in our community.

I had picked up my youngest son after work and decided to head to “Jucy’s Taco”, a local eatery.  Trust me when I say that they have the BEST tacos in our city!

(Another little nugget about me, besides my insatiable appetite for tasty tacos, is the fact that I drive a gray, Ford Escape. Although I bought it one month before Shawn was diagnosed, I had no idea how important my color choice would become.)

I proudly display a “365 Shades of Grey – Brain Cancer Awareness” vinyl sticker on my back window. I try to advocate in some way, every day of the year, which would be 365 days a year…. Thus the design I came up with.

I was standing in line with my soda cup, waiting on them to let me know that my order was ready.  A woman walked up to me and said, “Excuse me. Are you the one driving the truck outside with the 365 Shades of Grey Brain Cancer Awareness sticker on the back?”

She then proceeds to share with me that her brother had been diagnosed with brain cancer.

The tears fell later that night after I got home and laid in my bed. Tears of sadness because of what I had lost, tears of thankfulness that the message was reaching people, and tears for the family who was about to embark on a journey I wish upon no one.

I drive around and hope that my simple message on the back window is reaching someone. It’s a simple thing, a vinyl cling. People ride be and read it. I park in a parking lot and people pass by and read it. It’s just the thing I do 365 days a year for Shawn. It’s all for Shawn.

Well, on second thought, it’s all for anyone touched in anyway by brain cancer. I know I am making a difference.  I know, because someone walked up to me on May 1st and asked me if that was my truck and my sticker. It’s working. The word is spreading around. Brain cancer awareness has increased by leaps and bounds since our diagnosis in March 2012 because of little things.  Never give up advocating. You never know who you might come in contact with because of it.

Brain Cancer/Tumor Awareness doesn’t have to be pigeonholed into just the month of May – it can be done every day of the year, 365. 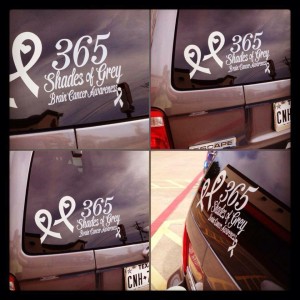 Wow. That is what I have been saying to myself as May 1 approached and I anticipated the website going live.

What a distance I have walked since that Friday morning in CA when I took Shawn to the ER.  That morning, at 47 years old, and making coffee for 30 of those years, he forgot how to make it.

What was March 2012. I felt we were all alone. Fast forward to today when the GBM Facebook page has 3603 followers and the GBM Facebook Group has 1860 members. I was never alone, but without social media, I might have felt that way for the journey’s entirety.

I wish that Shawn could see how awareness has grown. In 2012, we didn’t hear anything about it. He died fully confident that I could be a “game changer”. He continues to fuel me.

It took 44 years and the death of “my person” to find out what my mission was. My reason for being on this earth.

I am humbled and honored to serve the brain cancer community.